Fuso Heavy trucks from a galaxy far, far away… 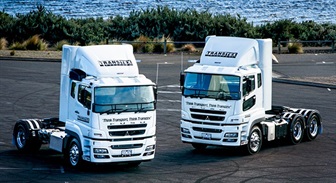 Transtex Transport director, Shane Blakeborough, has a tradition of naming all his trucks and knew exactly what to call his bold new white Fuso Heavy trucks as soon as he saw them. "They reminded me of the white Stormtroopers from the original Star Wars movies," Mr Blakeborough says. Thankfully, the eleven Stormtroopers Transtex has introduced recently are used for good instead of evil and distribute freight all over regional Victoria from Transtex’s base in Geelong, Victoria.

Mr Blakeborough made the decision to go with the Heavy trucks after discussions with a dealership.

"I wanted a product that could take us to 2020, which would allow us to move these trucks with high mass limits, low tare weights, which also had modern environmental technology and were very usable and driver friendly,"Mr Blakeborough says.

While hard economics were at the core of the decision, image also played a role. "We talked about how I wanted the trucks to look, how I wanted a real standout theme and that these trucks absolutely had to have the cool factor about them and they certainly have achieved that," Mr Blakeborough says.

Seven of the Stormtroopers are regular 6x4 models, two are 6x2 rigids, while two were selected as single-drive 4x2 units, to allow for a relatively short truck and single trailer combination. "The single-drive trucks run 10 metre long drop-deck mezzanines in country areas," Mr Blakeborough explains. "They carry 26 pallets, but they aren’t longer than 16 metres long," he says. "They are really short and are designed to easily get into back streets and laneways."

With a single-drive and relatively short trailers, Mr Blakeborough says this truck and trailer combination delivers maximum efficiency for the application. "With a 6.5 tonne front axle, 10 tonne on our rear airbag with high mass limits, we can achieve an 18 tonne payload out of a truck that is not much longer than a heavy rigid," he says

In terms of cargo, the Transtex Heavy trucks can haul 12 more pallets than a heavy rigid. There is also a safety benefit of running a shorter trailer, especially on the winding country roads the single drive Transtex trucks often use. The trucks have anti-skid brakes and Transtex has fitted electronic braking systems to all the trailers. Mr Blakeborough is also a big fan of the Heavy’s unique passenger side low window which offers excellent visibility and improves safety.

The automated transmission makes life much easier for the drivers too, Mr Blakeborough says. "I couldn’t believe how easy they are to drive. It just takes another level of stress off the driver. He’s not worrying about how or when to change gears. He can just concentrate on driving the vehicle."

Transtex is part of the SBL group, along with vehicle and equipment training provider Journey Management and the national SBL Logistics operation.

Mr Blakeborough, who left school at 16 to join the transport industry, was inducted into the National Road Transport Hall of Fame in Alice Springs in 2014.