A decade of reliable service from a single Fuso truck was enough for a Perth-based building site-preparer to buy seven more. Lee Pritchard is finally trading-in the FS52 8x4 Fuso he bought new 10 years ago, which he refers to as the 'old girl'. He’ll swap it for a brand new Heavy FV 6x4, joining three other new Heavy models in his business called Elohim, alongside two small Canters and mid-sized Fighter truck. 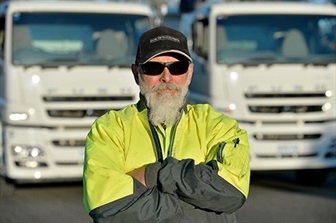 When asked why he keeps buying Fusos, Mr Pritchard points to the 2005 FS52 he started off with. "I just couldn’t fault it," he says. "It never ever let me down, not once."

The Elohim trucks and trailers look clean and straight, but they are made to earn a living through hard labour. Mr Pritchard, his son Josh and nine other employees use the trucks to clear building sites of rubble, rubbish and excess dirt before carting it all away. The team, which also does a lot of underground plumbing on new sites, uses the trucks to carry their various tools of trade, including bobcats and excavators.

The four Heavy models are all 6x4s with tipper bodies that pull dog trailers and were purchased through a Fuso dealer. All of them run a 12 litre six-cylinder OM457 engine using a Selective Catalytic Reduction system. Asked about the 455hp and 2200Nm the engine delivers, Mr Pritchard says: "That’s heaps. You couldn’t need any more than that."

Although his old faithful Fuso ran a manual transmission, Mr Pritchard decided to select the recently upgraded 12-speed automated manual transmission for his four new Heavy trucks. "You get good fuel consumption and you don’t have to worry about the gearbox or the clutch," he says. "The blokes just jump in, put it into gear and go."

The Heavy is the largest truck in the Fuso line-up and is available as a 4x2, 6x4 and 8x4. Mr Pritchard chose the 6x4 because it is easy to manoeuvre and this means his drivers can turn around in relatively tight spaces. "The turning circle on these six wheelers is just brilliant," he says. "They will just go right around."